Sometimes it is impressive to see visual proof of new yield management practices, especially when the side-by-side comparison is so easy to spot. That’s the case with a recent side-by-side trial done by one of our dealers, Brad Rocke of Agri-Management Solutions, Inc. in Wanatah, Ind.

Rocke and his team ran a side-by-side trial to compare 360 Y-DROP®N placement with a traditional coulter sidedress system. In the trial, Rocke applied 50 lb. of N in corn ranging from V4 toV5 in alternating strips with 360 Y-DROP and his coulter system. He applied the same rate in both strips 12 hours apart (coulter the evening of May 27 and the 360 Y-DROP the next morning, May 28). The night of May 28, it rained. Less than three weeks later, the difference is clear. 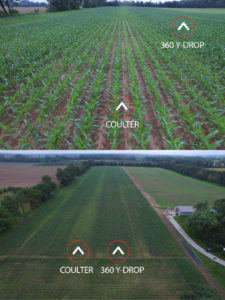 There’s More to the Story
360 SOILSCAN™ helps shed more light on the story. Rocke took soil nitrate samples on June 15 to see where his soil nitrate levels were at, especially since his field experienced heavy rain since the V4/V5 N application. The results showed that in the coulter strips, the N remains in the middle of the row – nearly 15 in. from the stalk base. The corn roots haven’t gotten to the N in the middle of the row yet and the corn in the coulter strip was deficient of N according to tissue tests. Comparatively, in the 360 Y-DROP strips, nearly all the N was gone due to efficient plant uptake. As evidenced in the photos, the corn is green and healthy.

Through precision placement, and flexibility for application timing, 360 Y-DROP gives farmers more control to manage nitrogen and spoon feed the crop when and where it needs N.

Learn more about 360 Y-DROP and the importance of N application placement in this blog post from my colleague Jamie Brand. And, reach out to your local 360 Yield Center Dealer if you’re looking for more control over your N application.