As summer weather patterns settle in, many areas of the country are experiencing opposite ends of the weather spectrum. In areas with high rainfall and humidity, disease pressure has begun to show up in some fields, especially corn-after-corn fields. In areas with ample rain, two diseases that could be making their first appearance are Gray Leaf Spot and Northern Corn Leaf Blight. Infections for both diseases generally begin on lower leaves after spreading from previous year’s corn residue. The disease will progress up the plant and then spread between plants and eventually to other fields, as the spores can travel long distances in the wind.

Often times when discussing the probability of economic response to fungicide applications, we point to items such as previous crop, hybrid susceptibility and the level of inoculum present to help guide our decisions. While those are rock-solid criteria to help make the decision, we could be overlooking other limiting factors such as nitrogen. In 2015 BASF conducted trials that indicated when nitrogen was eliminated or reduced as a limiting factor, yield responses to plant health applications such as Headline AMP were higher and more consistent. 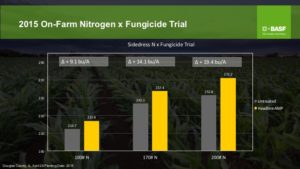 Another factor to consider is coverage in the canopy. Although airplanes do a solid job of covering the top of the plant, their application is limited to a few gallons per acre and thus it can be challenging to achieve deep penetration into the canopy. Utilizing new technologies to deliver fungicides via high-clearance sprayers and utilize higher volumes of water within the canopy can increase coverage and help slow the spread of the disease up through the canopy. Be sure to scout fields that contain corn residue and more susceptible hybrids. Once you find the disease, make sure you employ new practices to eliminate other factors that might mitigate the fungicide response such as low nitrogen levels.

As new technology emerges allowing growers to place fungicides deep into the canopy to slow disease progression, growers should investigate the potential benefit of those technologies on their farms to help increase the likelihood of a response to plant health application.