There were many times during the 2015 growing season that many farmers in the Midwest and Ontario were tempted to trade their four-wheel drive tractors for rowboats. There’s no question 2015 graced us with historical rainfall records, but don’t be fooled by this dry harvest. The heavy rainfall left its mark in our soils, and farmers need to consider the artifacts left from those rain clouds.

Most of us are well-versed on how to reduce compaction caused by sprayers or side dress equipment: If you see a rut, fix it.? We choose to fix these areas because we know our bulk density has increased. When bulk density is increased, water does not percolate in typical fashion through the profile, and oxygen does not get to our crop roots. We are well aware of areas in our fields where we were stuck, but perhaps the most lasting repercussion from the 2015 season on 2016 yield will be the increased bulk density of our soils from a source without tires. The weight of the additional water that fell in 2015 caused soils to compact, and as we consider yields for 2016, we need to appropriately manage the increase in bulk density that took place – sometimes throughout an entire field. 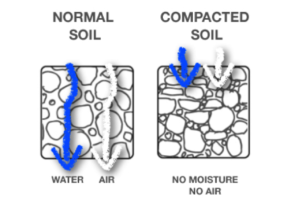 Bulk density is the mass of soil per unit of soil volume = grams/cc. Bulk density of soils is aided by weight, be that of a tractor tire or 20+ inches of rainfall received. One inch of rain on one acre of land weighs 113.31 tons. Key percentages to aim for in soil is 25% Air, 25% Water, 45% Mineral, and 5% OM. Compaction leads to the loss of pore space between soil particles and occurs when that space is squeezed out of the soil and appears somewhere else. In heavily compacted soils, air is the limiting factor. Having limited air slows microbial functions, root development, and the availability for a root to uptake necessary nutrients. While we can distinguish ruts with our eyes quite easily, increased bulk density caused by excess rainfall is a different story, as the landscape looks continuous throughout. Yet, that doesn’t mean it’s not leaving a negative mark on your fields.

Don’t Let It Steal Your Yield

Alleviating compaction throughout the whole field might be a good consideration for 2016. The increase in bulk densities can be remedied by various methods, such as cover crops, tillage, and, if you’re in an area with soil moisture, the freeze/thaw process. If you are using tillage, set your tillage depth one-inch below the increase in bulk density, making sure the soil is dry enough to create the desired result of fracturing within the compaction layer. The soil should crumble in your hand and not make a ball. If the soil is too wet, you will likely only cut slots and smear the soil, therefore missing the fracturing your soil needs – and your chance to encourage proper rooting depth in 2016.

During harvest of 2015, you are already determining your yield potential for 2016. Taking a few steps to account for your increased soil bulk density can definitely help aid your journey for 300 bu/A. Consider these tips, and learn more about compaction in this blog post from Jamie Brand.