The 2015 growing season marked an important year for 360 Yield Center, as we conducted multiple field trials throughout the Corn Belt. We shared a few initial hand-check yield results at our Proving Grounds field day in August, and now, the harvest data is in, and we’re eager to begin sharing results.

In the image below, you see the yield map of the test strips. The aerial photo is above. 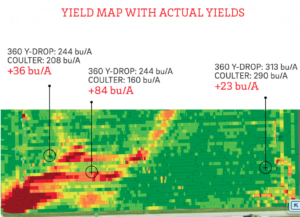 Additionally, there were areas in the field with heavy rain and poor drainage. In those stressed areas, late-season N provided a huge yield advantage.

For more background on the trial, take a look at Gregg Sauder’s presentation at Proving Grounds. Also, stay tuned for our 360 Yield Center Yield Book, an in-depth analysis of our 2015 field trials, coming soon in early 2016.