We manage resources in an attempt to grow corn as efficiently as possible. New technology has given us new ways to evaluate efficiency. For example, we’ve become accustom to looking at row-by-row as-applied maps for our planters. We know the position of every seed. But some of our most important and expensive inputs have not benefited from these tech breakthroughs. In fact, we are flying blind when it comes to the row-by-row accuracy of our second most important and expensive input.

Data collected by 360 Yield Center are showing us that there is more variation in as-applied rates than most of us think.

Many growers will apply nitrogen via anhydrous ammonia in the next few weeks. Often, they rely on an applicator the uses only tank pressure and hose length to regulate anhydrous flow to the knife. Unfortunately, anhydrous is very unstable and can ‘boil off’ at various stages in the delivery system, creating uneven distribution of nitrogen across the bar.

Growers wisely wait until temperatures drop below 50 degrees to help minimize the conversion process of anhydrous molecules to ammonium and then to nitrates. Tank pressure is much more difficult to maintain during colder temperatures, which creates delivery issues that reduce uniformity. Often, growers see the result of this issue the following years in the form of yellow streaking where some knives did not deliver the correct amount of N.

Cold flow systems have been developed to help manage this issue, but those systems have challenges as well. In order to measure row-to-row variability in these systems, we conducted a ‘bucket test’. This test uses small tanks filled with water to capture the anhydrous flowing from each knife or row of the applicator. The tanks are weighed to determine the volume of anhydrous delivered to each knife.
We were surprised by the results, finding as much as 45 pounds of variability in one row – some rows over 22 pounds above target, w
hile other rows were 22 below target.

360 EQUI-FLOW uses a pressurized delivery system to keep anhydrous in the liquid form all the way to the knife because flow meters are accurate with liquid, but inaccurate with a mix of vapor and liquid. Rather than the 45 pounds of variation seen in tank-pressure systems, 360 EQUI-FLOW reduced variability to around 8 pounds. 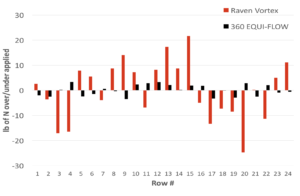 The pressurized application system can be used well into the fall – only limited by frozen ground. This extends the application window and reduces the need to apply anhydrous early, with high ambient temperatures. By not relying on tank pressure the window of application is expanded as well so growers can comfortably apply in cooler temperatures with the assurance of accuracy while minimizing fall conversion.