During the 2015 season many growers experienced wet to excessively wet conditions. This led to extensive loss of nitrogen due to denitrification and/or leaching in many fields. Growers that were able to apply supplemental N last year often reaped very large rewards for additional midseason N applications. Fast forward to the 2016 season and many areas experienced a growing season that was dramactically different from last year. Dry conditions throughout July left us wondering about the value of midseason application of nitrogen.

Keep in mind that there are three mechanisms for nutrients to reach the plant: mass flow, diffusion and root interception. For nutrients such as nitrogen, sulfur, magnesium, calcium and boron mass flow is the major mechanism for uptake. This is the process by which soluble forms of the nutrient move to the plant through the convective flow of water to the roots.

For nitrogen, estimates for the total amount of N transported to the plant by mass flow are in the 75-80% range. In other words about 80% of the nitrogen your corn plant takes up gets to the plant in the soil water. Since nitrogen moves to the plant in water then what happens in a dry year where water is limited. All things being equal does placement of the N directly over the roots lead to higher efficiency vs placement in the middle of the row in a dry year?

Conducting trials using traceable nitrogen applied in these various methods can help uncover the truth of this theory. Regional Agronomy Manager Stephanie Smith began measuring nitrate levels across the row on her farm at the beginning of the growing season, taking soil samples every week in a dry environment. As you look at the data she collected in the graph to the right, you can see the nitrate levels dropping in-row due to crop removal as the corn took it up during the growing season. Interestingly nitrate levels in the middle 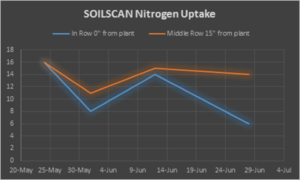 of the row are drawn down much more slowly. This could be due to the drier conditions and the lack of mobility of the nitrogen in limited ground water. Does that mean yields will be higher? Not necessarily, because the dry weather could suppress overall yield levels and require less nitrogen. If mineralization was high enough to compensate for lower nitrogen levels transported via mass flow, yield differences may be limited.

What we might be able to infer from this data is that placement of nitrogen over the row could allow us to be more efficient in a dry year. In addition, at some point that nitrogen in the middle of the row will go somewhere. If the crop does not take it up, it could end up in ground water which is simply wasted dollars.

We will have plenty of yield data to share with you this fall that may help answer this question. Click here if you are interested in receiving trial data that will be featured in our 2016 Yield Book.